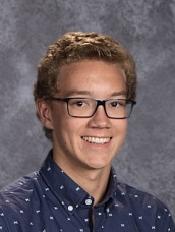 Nick has been involved in his local community as a confirmation student at Zion Lutheran where he participated in many hours of community service that included volunteering at Zion’s Vacation Bible School, Feed My Starving Children, and Zion’s annual spring Serve Weekend. During his junior year, Nick participated in BHS National Honor Society where he completed community service projects as well as 30 hours of community service. Nick has also been involved in his local community by working part-time throughout high school at local grocery store Coborn’s, Papa Murphy’s Pizza, and most recently the Three Rivers Park District – Baker Park where he worked the summer of 2019 and has plans to return the summer of 2020.

My nomination for Powerade Athlete of the Year goes to distance runner Nick Oak of Buffalo High School A soft-spoken, lead by example type athlete, Nick might not be the typical athlete nominated for this award. His junior year Nick ran very well advancing to state in Cross Country and Track but basically running in the shadow of Senior State Champion and HS All American runner Isaac Basten who is now running at Drake University. Nick worked harder and with a soft yet, determined approach, he challenged and led a young Bison Cross Country team right back to the state meet, and he himself finished 6th overall in the large school class- the highest finish for a Cross Country runner in our school history. You didn’t notice any difference in NIck’s demeanor and approach his junior year to his senior year. Every day he would come to practice with a smile and the expectation for himself and everyone around to reach for success and get better.