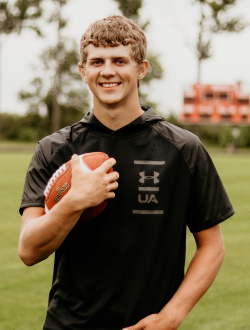 Jordan is involved in his church, National Honor Society, and helps with various youth camps for football and basketball. He is a great role model for kids in our community that is always willing to take time for younger kids or fans after events.

Jordan is an outstanding athlete for many reasons. He has a lot of natural ability, he studies and prepares for games mentally better than almost any athlete I have ever seen, and his drive to be successful is outstanding. He has been in leadership positions on many teams since he was a sophomore in high school, and many of those teams have been very successful. He is a great leader who lifts up those around him, rather than leaving them behind.