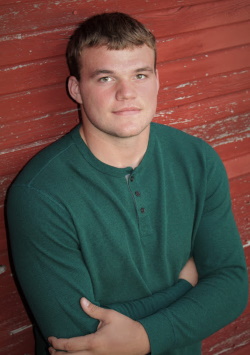 Craig is active in the community by helping with blood drives, ushering at church, assisting youth during religion classes, cutting wood and mowing for his elderly neighbors, mentoring young students in school, serving as a unified partner for Special Olympics, assisting with youth football and wrestling camps, and volunteering at a resort.

Craig is an excellent student, athlete, and leader at Verndale High School. His work ethic and dedication to be the best help him to reach his highest potential every day. He is committed to working at a high level in every aspect of his life.

Craig is a dominant athlete on the football field and wrestling mat. He has been a two-time participant in the state football tournament, two-time state wrestling champion, national wrestling champion, and recipient of many other athletic awards because of his work on the field and mat. His athletic abilities have brought him a great deal of recognition and success.
Most importantly, Craig is a leader in high school. He always makes sure he leads his teammates in a positive way. His teammates see Craig as a role model and leader of the team. His actions always speak louder than his words, and he is always willing to help his team compete at the highest level.

Craig’s leadership, scholarship, and athletic ability make him a great candidate for Powerade’s Athlete of the Year. He has had a big impact on his teams, school, and community.